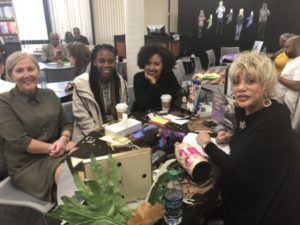 The saying, “Don’t judge a book by its cover,” means you shouldn’t prejudge the value of something by its outward appearance. And that was one of the messages at a college near Washington, where some people became human books, of sorts, as they talked about how appearances can be deceiving and lead to preconceived biases.

At an event called the Human Library Project, students at Northern Virginia Community College in Alexandria, Virginia, could check out a person — a “human” book — instead of a book in their library.

The organizer, Patricia Cooper, said the human books are celebrating diversity by verbally sharing the stories of their lives with the students in a non-judgmental atmosphere. In this third annual event, the “collection” included a civil rights activist, NASA scientist, and an opera singer.

“The goal of the human library is to talk to people in your community who you may otherwise not speak to because you have your own prejudices, stigma or you’re afraid,” said Cooper. She hoped the discussions “in a safe and supportive environment will break down some of these barriers.”

Najeeb Baha, director of recreation and wellness at the college, knows all too well what it’s like to try to break down barriers. Because he has fair skin, reddish hair and an Arabic name, people are often surprised to learn he is from Afghanistan. Baha said he has been detained in airports by security because he doesn’t look like what people perceive as the typical Afghan. And surprisingly, he said worshippers at a Virginia mosque were also prejudiced against him for the same reason.

“My goal is to inform everybody about the things that I’ve gone through,” said Baha, as he spoke to student Angel Navia about his story. Baha told him he thinks people shouldn’t focus on skin color, judge individuals by their last name, or discriminate against persons who have an accent.

Navia shook his head in disbelief. “The struggles that come from something simple like just a name, or where you’re from, and how that dictates some aspects of your life,” he said.

Student advisor Connie Robinson was another human book, sharing how she survived domestic abuse by her ex-husband.

“Life is 10 percent of what happens to us and 90 percent how we deal with it. That’s what I follow,” she said.

She explained that a college education helped get her out of a terrible situation so she could control her destiny.

“When I talk to students, I just want them to know that whatever they’re going through, continue to strive for their education because it is so important.”

Human book Siem Sium, an Eritrean immigrant who is also a student at the college, chatted about not judging people who are homeless. He described what it felt like to live in a homeless shelter, at one point, when his hardworking family was unable to make ends meet. But through the hardship, he shared with other students, he learned “that it is what’s inside of someone that counts,” and “the quality of a person is so much more valuable than the quality of their possessions.”

Not all human books were affiliated with the college. Some, like Tyra Garlington, came from the local community. The optimistic inspirational speaker, who said she had suffered loss and abuse and survived cancer, told two women from Africa to take whatever comes their way and use the good, bad and scary to improve their lives.

“She inspired me to stay strong and work hard,” said Nancy Blankson from Ghana.

Brian Dailey, a human book who is an artist, spoke about his trips to 113 countries in seven years. Dailey said that during his travels, he asked people he photographed for a one-word response to a series of other words, including love, freedom and war. He discovered people in different countries often had very different reactions to the same word.

“The word war in southern Africa was considered justification, liberation, and peace,” Dailey said, adding that when he talked to people in Syrian refugee camps, “it was tears, hunger, fear, and destruction.”

But he said people in most of the countries had a similar answer when he said the word government. Most people, he said, don’t like theirs very much.