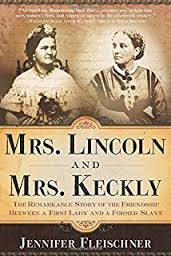 Elizabeth Keckley was born a slave in Dinwiddie, Virginia, in February 1818. After purchasing her freedom in 1855, she became a dressmaker for the wives of the political elite in Washington. In addition to her sewing skills, Keckley was an excellent networker. By 1860, she had moved to Washington, D.C., and established her own dressmaking business.

She was soon styling the Washington elite, including the wives of Robert E. Lee, Jefferson Davis, and Stephen Douglas, Lincoln’s former political rival. She had a spare style in contrast to the Victorian norm and was an expert with fit. She also scored the coup client, first lady Mary Todd Lincoln, who was an enthusiastic clotheshorse.

Keckley not only became Mrs. Lincoln’s dressmaker, she was also the first lady’s personal dresser and closest companion. She was a White House habitué during the pivotal years of the Abraham Lincoln presidency; the two ladies traveled together, with Keckley present for the Gettysburg address, and they raised money together for the Civil War effort.

Keckley son’s died in the war in August 1861, but her mourning was cut short to comfort Mrs. Lincoln, who lost her own son to typhoid the following February. Keckley was also there to provide support following the president’s assassination and Mrs. Lincoln’s transition out of the White House.

Keckley decided to write her memoir in part to salvage the former first lady’s reputation after the war. However, the publication of Behind the Scenes: Or, Thirty Years as a Slave and Four Years in the White House in 1868 had the opposite effect; feeling betrayed by the revelations in the book, Mrs. Lincoln cut off contact with the woman she once called her closest friend.

The once-celebrated dressmaker eventually lost most of her prominent clients and ran out of money. She accepted a faculty position at Ohio’s Wilberforce University in the Department of Sewing and Domestic Science Arts in 1892, but ill health prevented her from continuing. She died impoverished in May 1907 at the National Home for Destitute Colored Women and Children in Washington, D.C.

Keckley had an aristocratic bearing and was considered beautiful in her day. Her story has been revived and explored in plays and books such as Mrs. Lincoln’s Dressmaker, written by Jennifer Chiaverini and published in 2013.[1] 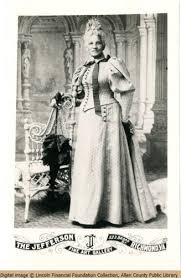