Home » Blog » A Problem to be solved, Life lessons » “Breaking News: Paris Under Attack! Terrorists Dance Between the Raindrops.”

“Terrorism isn’t James Bond or Tom Clancy. Even al-Quaeda is looking old school these days–now it’s just some guy with a bomb. He walks the same roads as us. He thinks the same thoughts. But he’s got a bomb.” 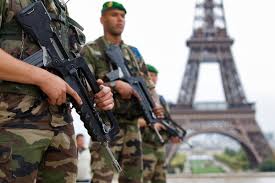 Who stole the identity of the city of love; the fashion capital of the world?

Friday night reality overtook the pretend horror of the highest rated action film. A random loud noise ended quiet conversations and  scattered those in mid sentence. The danger came from inside and out. The fear in the eyes of people passing by asked, “is it you?” A child-like wonder was almost impossible to find. Later, people drank beer on the sidewalk curb pretending they were not afraid.

The words “Breaking News” in a 27/4 news cycle can make the hair stand up on your neck. I feel like I am stuck in midnight, the turning point of days. I wake up afraid of something I won’t recognize until too late. How do you protect not only innocent lives but also their absolute values and ideologies?.  We have caught a global disease!

“There is an international disease which feeds on the notion that if you have a cause to defend, you can use any means to further your cause, since the end justifies the means. As an international community, we must oppose this notion, whether it be in Canada, in the United States, or anywhere else. No cause justifies violence as long as the system provides for change by peaceful means.”

If we can’t stop it, if we don’t wipe it out, what will happen to our legacy of :

“We hold these truths to be self-evident that all men are created equal, that they are endowed by their Creator with certain unalienable rights, that among these are life, liberty and the pursuit of happiness. That to secure these rights, governments are instituted among men, deriving their just powers from the consent of the governed. That whenever any form of government becomes destructive to these ends, it is the right of the people to alter or to abolish it, and to institute new government, laying its foundation on such principles and organizing its powers in such form, as to them shall seem most likely to affect their safety and happiness. Prudence, indeed, will dictate that governments long established should not be changed for light and transient causes; and accordingly all experience hath shown that mankind are more disposed to suffer, while evils are sufferable, than to right themselves by abolishing the forms to which they are accustomed. But when a long train of abuses and usurpation, pursuing invariably the same object evinces a design to reduce them under absolute despotism, it is their right, it is their duty, to throw off such government, and to provide new guards for their future security”. — ?

How do we save our nation; so hard-fought to win and so obviously fragile today ?

Was it all in vain?

In the midst of this “Scary Movie”, and