Home » Blog » A Problem to be solved, Life lessons, Women, young girls » How certain instants in our lives make us who we are 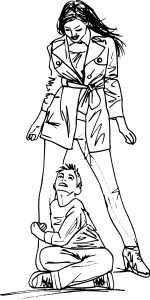 I spent all last week with pre-teens at Vacation Bible School. Loving and listening to them reminded me that who they may see in the mirror may, for varying reasons, be created by the words of others.

Shane Koyczan’s spoken-word poetry pays tribute to the consequences of our language.   If you have children in your life, it is a magnificent read. I have provided an edited excerpt here.

To This Day for the Bold and the Beautiful

When I was a kid, I hid my heart under my bed, because my mother said, “If you are not careful, someday someone’s going to break it.” Take it from me: Under the bed is not a good hiding spot. I know because I’ve been shot down so many times just from standing up for myself. But that’s what we were told. “Stand up for yourself.” And that’s hard to do if you don’t know who you are. We were expected to define ourselves at such an early age, and if we didn’t do it, others did it for us. Geek. Fatty, Slut, Fag.

And at the same time we were being told what we were; we were being asked, “What do you want to be when you grow up?” I thought that was an unfair question. We couldn’t say what we already were. We were kids.

When I was eight, I wanted to be a marine biologist. When I was nine, I saw the movie “Jaws,” and thought to myself, “No Thank you.”

When I was 14, I was asked to consider a career path seriously.

And they said, “Choose something realistic.”

So I said, “Professional wrestler.”

See, they asked me what I wanted to be, then told me what not to be.

We were being told that we somehow must become what we are not, sacrificing what we are to inherit the masquerade of what we will be. I was being told to accept the identity that others will give me.  And I wasn’t the only one.

She was eight years old, our first day of grade three when she got called ugly. We both got moved to the back of the class so we would stop getting bombarded by spit balls. We used to stay inside for recess because going outside was worse. Outside, we’d have to rehearse running away, or learn to stay still like statues, giving no clues that we were there. In grade five, they taped a sign to the front of her desk that read, “Beware of dog.”

To this day, despite a loving husband, she doesn’t think she’s beautiful, because of a birthmark that takes up a little less than half her face. Kids used to say, “She looks like a wrong answer that someone tried to erase, but couldn’t quite get the job done.” And they’ll never understand that she’s raising two kids whose definition of beauty begins with the word “Mom,” because they see her heart before they see her skin because she’s only ever always been amazing.[1]

This is a gentle reminder about the power of both our positive and negative words.