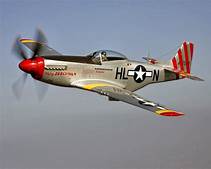 “The Tuskegee Airmen were the first black military aviators in the U.S. Army Air Corps (AAC), a precursor of the U.S. Air Force. Trained at the Tuskegee Army Air Field in Alabama, they flew more than 15,000 individual sorties in Europe and North Africa during World War II. Their impressive performance earned them more than 150 Distinguished Flying Crosses; and helped encourage the eventual integration of the U.S. armed forces.

SEGREGATION IN THE ARMED FORCES

During the 1920s and ‘30s, the exploits of record-setting pilots like Charles Lindbergh and Amelia Earhart had captivated the nation, and thousands of young men and women clamored to follow in their footsteps.

But young African Americans who aspired to become pilots met with significant obstacles, starting with the widespread (racist) belief that black people could not learn to fly or operate sophisticated aircraft.

In 1938, with Europe teetering on the brink of another great war, President Franklin D. Roosevelt announced he would expand the civilian pilot training program in the United States.

At the time, racial segregation remained the rule in the U.S. armed forces—as well as much of the country. Much of the military establishment (particularly in the South) believed black soldiers were inferior to whites and performed relatively poorly in combat.

But as the AAC began ramping up its training program, black newspapers like the Chicago Defender and Pittsburgh Courier joined civil rights groups like the NAACP in arguing that black Americans be included.

In September 1940, Roosevelt’s White House responded to such lobbying campaigns by announcing that the AAC would soon begin training black pilots.

For the training site, the War Department chose the Tuskegee Army Air Field in Tuskegee, Alabama, then under construction. Home to the prestigious Tuskegee Institute, founded by Booker T. Washington, it was located in the heart of the Jim Crow South.

The program’s trainees, nearly all of them college graduates or undergraduates, came from all over the country. In addition to some 1,000 pilots, the Tuskegee program trained nearly 14,000 navigators, bombardiers, instructors, aircraft and engine mechanics, control tower operators and other maintenance and support staff.

Among the 13 members of the first class of aviation cadets in 1941 was Benjamin O. Davis Jr., the first African American graduate of West Point and the son of Brig. Gen. Benjamin O. Davis, one of two black officers (other than chaplains) in the entire U.S. military.

In February 1944, the 100th, 301st and 302nd fighter squadrons arrived in Italy; together with the 99th, these squadrons of black pilots and other personnel made up the new 332nd Fighter Group.

The pilots of the 332nd began flying P-51 Mustangs to escort the heavy bombers of the 15th Air Force during raids deep into enemy territory. The tails of their planes were painted red for identification purposes, earning them the enduring nickname “Red Tails.”

They had destroyed or damaged 36 German plans in the air and 237 on the ground, as well as nearly 1,000 rail cars and transport vehicles and a German destroyer. In all, 66 Tuskegee-trained aviators were killed in action during World War II, while another 32 were captured as POWs after being shot down.

More than 300 of the original Tuskegee Airmen were on hand to receive the Congressional Gold Medal from President George W. Bush in 2007”[1].