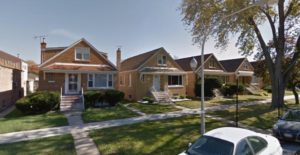 “Alden Loury remembers when buying his home felt like achieving the American dream. A black journalist from Chicago, Loury, and his wife were able to purchase a home for $165,000 in 2005 in Auburn Gresham, a predominantly black neighborhood on the city’s south side, where he grew up.

“I felt great,” he told Curbed. “I was back in my neighborhood. I knew the streets and the places I went to as a kid were still here.”

For Loury, who grew up in public housing as well as an apartment in a three-flat, buying a bungalow in his old neighborhood was a big deal. His timing, of course, meant coping with the impact of the Great Recession, which started in 2008 and caused the value of his new home to plummet. He and his wife dutifully paid the mortgage, waiting for the cycle of boom and bust to play itself out.

But recovery, for Loury’s home and much of the surrounding neighborhood, never really came. By 2015, when most parts of Chicago had recovered, Auburn Gresham and other predominantly black communities on the city’s south and southwest side were still dealing with lower home values and a thinning population.

Even after sinking money into repairs, including a new roof and windows, Loury estimated the market value of his home never went far above $70,000, based on Redfin data and sales prices for similar properties in the neighborhood. Banks weren’t interested in refinancing. Eventually, the Lourys realized that it didn’t make sense to keep sinking money into a home and mortgage that would never recover, and in 2015, they decided to take the hit and walk away.

“Even when you’re doing the right thing, you’re susceptible to this reality that these communities aren’t valued,” says Loury, who eventually moved to Bronzeville, another Chicago neighborhood. “We couldn’t escape that, despite our best efforts. What does that say for someone who’s on housing assistance, or chronically underemployed? That doesn’t speak well for the potential for success.

While local leaders and city government have repeatedly talked about helping neighborhoods recover, this exodus isn’t something the city has specifically articulated as an issue, says Loury. And that’s a problem.

“They’re missing the boat,” he says. “These communities are losing real assets. It’s a loss you shouldn’t stand by and watch. It’s a problem for cities to wake up and pay attention to.”[1]