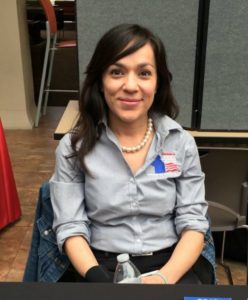 “Mary Jessie Herrera is from Somerton, a little town near Yuma, Arizona, not far from the Mexican border. A fourth-generation American, Mary always wanted to go into the military. Mary became a sergeant in the Military Police.

When President Bush gave Saddam Hussein his ultimatum, Mary’s unit was on the Kuwaiti side of the border waiting to move into Iraq.

While on foot, Mary carried an M16 like other soldiers in addition to a 9 mm sidearm due to her position as a Military Police, but as the gunner on her Humvee, she manned a 40 mm grenade launcher and a machine gun. “We were providing security escorts for convoys. I was 22 at the time. Were a Quick Response Force.

On November 8, 2003, Mary’s unit took prisoners to Fallujah.  On the way back to their base, Mary was riding in the turret of the lead Humvee with her rocket launcher and machine gun at ready. She saw two spotters on a bridge and knew they were calling in coordinates to some hostiles. “I told the guy below me to pass the word we were going to get hit.”

Mary began returning the fire with her machine gun. She felt a flick on her right bicep and thought she had been hit by a rock. It was a bullet that passed through the flesh. She kept firing. “Then I got hit again,” she said, “and my arm fell into my lap. I had no feeling in my arm. I thought it had been blown off.” She yelled down to the guys for help, but they were all firing their weapons and could not hear her. She kicked the commander to get his attention. “The look on his face when he looked up at me, I knew it was bad,” she said.

I remember thinking, this is it. My whole 22 years of life on earth are over. I said to God, ‘If you need me for something, I am ready to go.’

They eventually sent Mary to Brooke Army Medical Center in San Antonio, Texas, where the medical staff began the long process of reconstructing her arm. She was there for about year suffering through as many as 20 operations. It was during this period that the Coalition to Salute America’s Heroes appeared. “They paid off my school loans,” Mary said. “That was a huge burden off my shoulders.”

Today, Mary has only partial use of her right arm. Her arm is held together with screws and plates. She suffers from chronic pain but has no regrets.

Mary finished her college degree and is working on her master’s degree. She resides in Arizona and is raising her two daughters. She still communicates frequently with the officers and soldiers she served with. She is proud of our country and proud she was able to serve. ”[1]