When you stand before the Father figure in your life next Sunday, wear a huge smile and wrap it in a hug, and say: “Daddy, (Pops, Dad, or 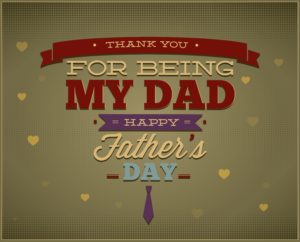 Whatever love language you use to talk to your Father), I need to tell how special today is.”

In 1910, a Spokane, Washington, woman named Sonora Smart Dodd, one of six children raised by a widower, tried to establish an official equivalent to Mother’s Day for male parents. She was successful: Washington State celebrated the nation’s first statewide Father’s Day on June 19, 1910.

Slowly, the holiday spread. In 1916, President Wilson honored the day by using telegraph signals to unfurl a flag in Spokane when he pressed a button in Washington, D.C.

During the Great Depression, struggling retailers and advertisers redoubled their efforts to make Father’s Day a “second Christmas” for men, promoting goods such as neckties, hats, socks, pipes and tobacco, golf clubs and other sporting goods, and greeting cards.

In 1972, in the middle of a hard-fought presidential re-election campaign, Richard Nixon signed a proclamation making Father’s Day a federal holiday at last.

“Dad, for all those times I left it unsaid, Thank You! For being there, for showing me the way, even when I didn’t make it easy, Thank You! For believing in me and encouraging me to dream, and for being such an inspiring presence in my life, Thank You!”

This may work, and feel even better!