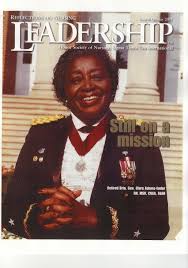 Clara Adams-Ender was born in Willow Springs, North Carolina in 1939, the fourth child of ten and grew up in a family of sharecroppers. Her parents were Caretha Bell Sapp Leach and Otha Leach.  She attended North Carolina Agricultural and Technical State University earning her B.S. degree in nursing in 1961. After that Adams-Ender joined the U.S. Army Nurse Corps.

She entered the service as a second lieutenant and received training at Brooke Army Medical Center in Fort Sam Houston, Texas.   In 1963, she was assigned overseas, beginning as a staff nurse for the 121st evacuation hospital in the Pacific theater near North Korea and would later serve in Germany. In 1964, she worked as a medical-surgical nursing instructor at Fort Sam Houston. In 1967, she became the first female officer to receive an Expert Medical Field Badge and returned to school.

After earning her M.S. degree from the University of Minnesota, she began working at the Walter Reed Army Medical Center in Washington, D.C. Adams-Ender’s first assignment was as a medical-surgical nurse instructor, then as an assistant professor, until she was promoted to education coordinator in 1972. In 1975, while the assistant chief of the Department of Nursing at Fort Meade in Maryland, Adams-Ender entered the U.S. Army Command and General Staff College in Fort Leavenworth, Kansas. She graduated in 1976 as the first woman to earn a Master of Military Art and Science degree at the College. She graduated from the U.S. Army War College in 1982 as the first African American Nurse Corps officer in the Army.

in 1987, after working as the Chief of the Department of Nursing in the 97th General Hospital, Chief of Nurse Recruiting at Fort Sheridan, Illinois, Chief of the Department of Nursing at Walter Reed Army Medical Center, Adams-Ender was promoted to the rank of Brigadier-General and became the Chief of the Army Nurse Corps. In 1991, she was selected to be Commanding General, Fort Belvoir, Virginia, and served in this capacity as well as the Deputy Commanding General of the U.S. Military District of Washington until her retirement in 1993.

Throughout her career, Adams-Ender was known for being active in nurse recruiting, initiating nursing units and advocating on behalf of critical care nurses for increased pay. She has received a Distinguished Service Medal with Oak Leaf Cluster, Legion of Merit award, an Army Commendation Medal and Meritorious Service Medal with three Oak Leaf Clusters. She has also received non-military awards, including the Roy Wilkins Meritorious Service Award of the NAACP, the Gertrude E. Rush Award for Leadership from the National Bar Association, and, in 1996, was named one of the 350 women who changed the world by Working Women magazine. She is currently the President of Caring About People With Enthusiasm (CAPE) Associates, Inc.

In 2001, she published her autobiography, My Rise to the Stars: How a Sharecropper’s Daughter Became an Army General.

Getting to know Clara, I am reminded of the song lyrics, ” I’m every woman; its all in me!” Clara, thank you for your service.