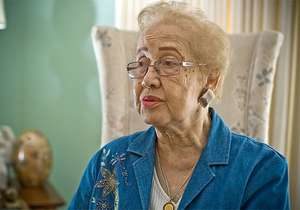 “Over a decade before Neil Armstrong made “one small step for man,” Katherine Johnson was making giant leaps for all women.

In 1953 she began working at the National Advisory Committee for Aeronautics (NACA)’s West Area Computing unit, a group of African American women who manually performed complex mathematical calculations for the program’s engineers. The women, known as the West Computers, analyzed test data and provided mathematical computations that were essential to the success of the early U.S. space program. During this time, NACA was segregated, and the West Computers had to use separate bathrooms and dining facilities. That changed in 1958 when NACA was incorporated into the newly formed National Aeronautics and Space Administration (NASA), which banned segregation.

At NASA Johnson was a member of the Space Task Group. In 1960 she coauthored a paper with one of the group’s engineers about calculations for placing a spacecraft into orbit. It was the first time a woman in her division received credit as an author of a research report. Johnson authored or coauthored 26 research reports during her career.

Johnson also played an important role in NASA’s Mercury program (1961–63) of manned spaceflights. In 1961 she calculated the path for Freedom 7, the spacecraft that put the first U.S astronaut in space, Alan B. Shepard, Jr. The following year, at the request of John Glenn, Johnson verified that the electronic computer had planned his flight correctly”[1].