Home » Blog » Accomplish Anything, Facts you need to know, Inspiration, Personal Empowerment, The power of grace, Women » Its Women’s History Month: What did the first woman to present a case to the United States Supreme Court wear? 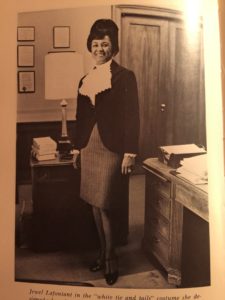 Mrs. Jewel Stradford Lafontant was the first woman of any color to present a case before the United States Supreme Court. That occasion presented her with an unusual problem. Lawyers presenting cases before that august body have always, by tradition worn white tie, striped trousers, and tailcoats. Mrs. Lafontant consulted with various males in her profession, but none of them had the slightest idea of what a woman in that position might wear. One suggested that she appear before the Supreme Court in a long white evening gown. In the end, Mrs. Lafontant solved the problem herself by designing an outfit on her own, featured here. It consisted of a slim-cut skirt of gray and white stripped material, with a hemline just below the knee; a modified tailcoat; and a white blouse with a white Jabot at the throat. The justices complimented her on her appearance. [1]

In the 1963 case, she argued and won what she considered the most important case in her career: Lynum v. Illinois, her first case before the Supreme Court. Lafontant’s client, Beatrice Lynum, had been convicted of selling narcotics. Lafontant argued that Lynum’s confession was not legally admissible since the police had threatened to take her children. The 1966 case Miranda v. Arizona, which established the “Miranda warnings” so familiar from police dramas, drew on the precedent set in Lynum.

Jewel Stradford Lafontant became a key player in the fields of law and politics long before the women’s movement gained momentum in the 1960s. Her father, renowned U.S. Supreme Court Attorney C. Francis Stradford, carefully groomed her to become a pioneer in the male-dominated arena of law. LaFontant achieved many firsts for women in the field, becoming in 1946 the first woman to graduate from University of Chicago Law School, in 1955 the first black woman to be named Assistant U.S. Attorney, and in 1973 the first woman Deputy Solicitor General of the United States.[2]

Born in 1922, Jewel Stradford was, in Black’s description, “a member of one of Chicago’s most historically important and prestigious African-American families.” Her mother, Aida Carter Stradford, was an artist and homemaker; her father, C. Francis Stradford, was a prominent attorney and co-founder of the National Bar Association.

In addition to her glass ceiling–shattering work in politics, Lafontant did the same in corporate America, serving on the boards of Jewel Companies, Mobil, Equitable Life Assurance, Trans World Airlines, Revlon, Hanes, and eventually her son’s firm, Ariel Capital Management. She enjoyed the work: “You begin to learn from the inside just how these large businesses are actually run,” she said, “and business is what has made America great.” Lafontant also served on the boards of Oberlin College, Howard University, and Tuskegee Institute.[3] 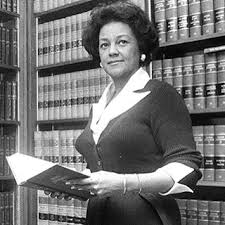